About The Belmar Fishing Club

On September 1, 1909, the Belmar Fishing Club was first organized with forty-nine charter members. The first meeting of this newly organized club was held on that date in Charles Reimuller's Hardware Store located on F Street, near 8 th Ave, Belmar N.J. The following men attended the first meeting of our Club: David McIntyre, George J. Simpson, Frank Kain, Howard Kain, Charles Reimuller, Henry Reimuller, Harry C. Cole, William A. Herbert, Chaster Robotham, and F. R. Lefferts, Jr. A committee was appointed to nominate officers and drew up a constitution and by-laws to be acted upon at a meeting scheduled for September 1909. At the meeting, held on September 8, 1909, the constitution and by-laws presented by the committee were adopted. The following named officers were elected and installed: President, George J. Simpson; Vice-President, Harry C. Cole; Treasurer, F.R. Lefferts, Jr., and Secretary, B.C. Reimuller. Board of Governors: David McIntyre, Chester Robotham, J.Harry Mount, William A. Herber, and L.J. Brown. The manes of the forty-nine members who had signed the charter roll were read and approved. Annual dues were only $1.00.

Arrangements were made with the Ocean Pier Co. to construct a clubroom and for use of the pier. In order to provide a meeting place for the club, the Ocean Pier Company built what was at that time considered a commodious clubroom. To further create a greater interest in pier fishing, season tickets were issued to the member of the Belmar Fishing Club at a special rate. 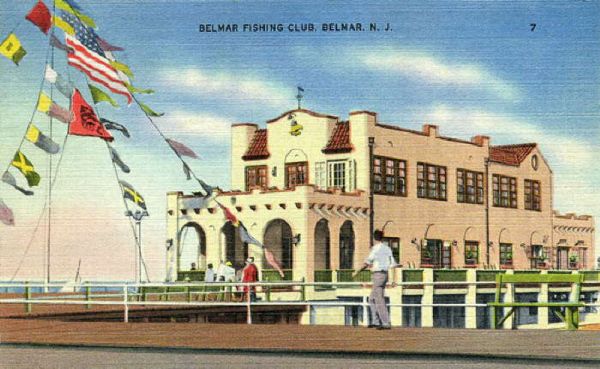 On May 30, 1930, the Club House which we now occupy was officially dedicated as a fisherman's paradise - truly a shrine for sportsmen.